How much has Cuban productivity increased since 1960?

Is it possible for two equally rich countries (on a per capita basis) to have different level of output per worker? The answer is obviously yes, and it matters in the case of measuring growth in Cuba since the revolution.

Well, countries A and B are basically Cuba and most of the rest of Latin America. Since the 1950s, Cuba's population has aged rapidly but birth rates have plummeted so fast that families shrunk. With fewer kids in the population, it means that the share of the Cuban population that are of prime working age increased rapidly. This is what biases the comparison of Cuban living standards with other Latin American countries.

In the figure below, I took the GDP (the Maddison data) of Cuba since 1950 (indexed at 1960 to see the arrival of Castro) and divided it by the total population, the population above 15 years of age and the population between 15 and 64. 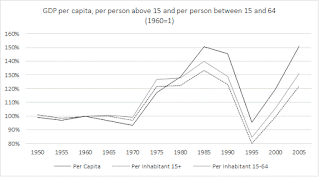 As one can see, with the GDP per capita series, Cubans saw a 50% increase in their incomes between 1960 and 2005 (the Maddison data stops at 2008). However, when you look at GDP per working age adult in order to capture the growth in productive capacity, you get moderately different results whereby the cumulative increase is three-fifths to half as small.

In light of this, it seems like Cuba's living standards are less and less impressive.

Source: How much has Cuban productivity increased since 1960? | Notes On Liberty - https://notesonliberty.com/2017/01/27/how-much-has-cuban-productivity-increased-since-1960/

A life sacrified so others could be free

We run various sites in defense of human rights and need support to pay for more powerful servers. Thank you.